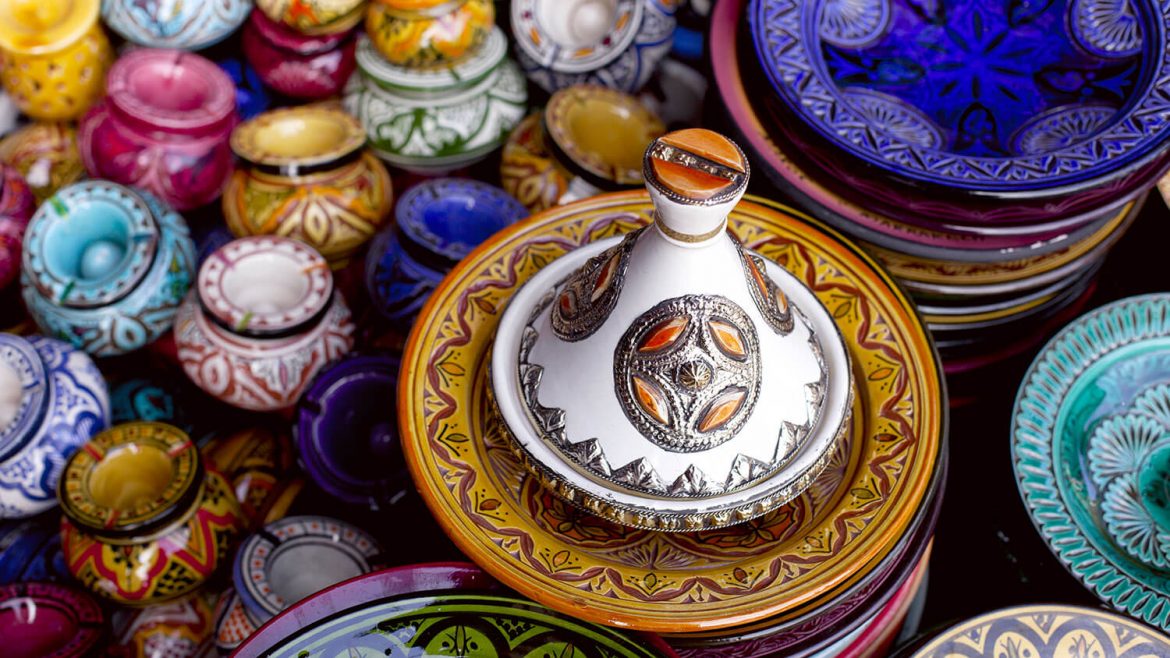 Written by Mary Chong February 13, 2022
This article may contain affiliate links. This means that clicking on or purchasing products we recommend through a link may earn us a small commission. For more information read our disclaimer page.

Morocco is a beautiful and enigmatic country that has lured its foreign visitors for millennia and remains one of the most-visited nations in Africa. The best of Morocco includes its picturesque old towns, soaring desert mountains, laid-back beaches, and so much more. Read on below for the most beautiful cities in Morocco.

Need a travel journal and trip planner for your trip? We got you covered!

Marrakech (or Marrakesh), is a city that’s both Eastern and Western and both African and Arab. This city is electric and vibrant and is the ultimate meeting place of different cultures. If you seek places to visit in Marrakech, you won’t be disappointed. Marrakech is found in the shadow of the Atlas Mountains range, though it can be one of the hottest cities in the country in the summer months. The city is most famous for its 12th century Koutoubia Mosque, which features a single minaret that you can see for miles and its medieval medina, a maze of markets and alleys that are UNESCO-protected. The fun part about Marrakech is getting lost, so be prepared to embrace the chaos. You’ll be a wandering soul in the souks of Marrakech’s medina and soon agree it’s one of the most captivating and compelling cities in the world.

Read the article: 6 Travel Tips While Visiting a Mosque

Experience Marrakech’s Jemaa el-Fna square each evening at sunset. Visitors and locals congregate to see the magicians, snake charmers, acrobats, storytellers, Gnaoua musicians, and fortune-tellers that together create an experience to remember. For one thousand years, Jemaa el-Fna has been Marrakech’s cultural soul and will continue to be for thousands more. Marrakech has been designated the African Capital of Culture 2020 thanks to its Moorish artistic heritage, traditions, and rapidly growing contemporary creative pulse.

There is so much to discover about Marrakech’s cultural scene, like the Musée Yves Saint-Laurent Museum, the Museum of African Contemporary Art Al Maaden, and the Museum of Photography.

Read about our stay in a Marrakesh riad in the article:
Alight in luxury at Riad Dar Les Cigognes Marrakesh Morocco

Casablanca is another one of Morocco’s most iconic cities. It was immortalized in the film of the same name back in 1942, starring Humphrey Bogart. There’s more to Casablanca than the on-screen sin city image; it’s one of the most modern and fast-changing cities in Morocco, as well as the country’s economic capital.

Casablanca’s rapidly growing business sector and cosmopolitan outlook make the city appear more like the South of France than the Maghreb. Casablanca is architecturally home to a distinctive blend of local Moroccan craftsmanship and Parisian art deco.

Casablanca’s must-sees include the Place du 16 Novembre, the Hasan II Mosque, and the Place Mohammed V.

The blue-washed and picturesque city of Chefchaouen, otherwise known as The Blue Pearl of Morocco, has a relaxed atmosphere and is like a vibrant arts and crafts hub. The blue city is nestled amongst the peaks of the Rif Mountains.

Though the official language of Morocco is Arabic (and some French), the locals in Chefchaouen speak Spanish.

One theory explaining why the buildings in the city are painted blue is that after the influx of Jewish immigrants that fled the Spanish Inquisition, there was a trend of blue buildings. In Judaism, blue represents divinity as it’s the colours of the sky and the sea. Others believe that blue keeps away the mosquitos and the flies. Whatever the real reason is, this breathtakingly beautiful city doesn’t only facilitate a slower pace of life. If you are trying to find things to do in Chefchaouen, there’s plenty to offer, with day trips and tours, museums, and the nearby Talassemtane National Park. It’s one of the best cities in Morocco.

Rabat, the Capital of Morocco

The capital of Morocco is located on the coast with some of the country’s most tranquil beaches. Another perk about Rabat is that the weather is excellent all year round, so it’s a favourite amongst its visitors.

There are plenty of things to do in Rabat as the city has two parts; the Old Town and the New Town. The Old Town has an overall historical vibe with its medina, traditional souk’s- otherwise known as bazaars – and its general wistful charm.

Rabat has some of the best museums and art galleries in Morocco, including the Museum Mohamed VI of Modern and Contemporary Art and the National Archaeological Museum.

Rabat’s white and blue homes, winding alleyways, soothing waters and sparkling beaches are all awaiting you in this magnificent city.

Agadir, the “Miami” of Morocco

Agadir is the Miami of Morocco, making it the ultimate beach destination. Agadir successfully rebuilt itself after being destroyed by an earthquake in 1960. Agadir managed to rebuild itself in the following years and is famous for its beach-front boulevards and its top tourist attractions, including the National Park of Souss-Massa and the Agadir Museum.

Agadir’s recent marina construction has made the port city one of the go-to destinations for yachters. There’s also the option to have boat trips arranged along the coast for a memorable experience.

Agadir’s beach is rimmed with plenty of restaurants, hotels, café’s, along with deckchairs and sunshades for hire.

Essaouira has a distinct European vibe and is a coastal city. The city lies on the crossroads between the Arab Chiadma and the Haha Berbers tribes.

The city was once under the French protectorate, so there was a rich fusion of architectural styles and cultures. Essaouira is known for its strong winds, sandy beaches, windsurfing, spice-scented lanes, palm-lined avenues, and the medina.

Essaouira has seaport fortifications that have been preserved since the 18th century and are considered a UNESCO World Heritage Site.

Another attraction worth looking into is the Sidi Mohammed ben Abdullah Museum. The museum is located in the former residence of a pasha.  It is rich in the history of local musical traditions, regional art, and an ethnographic collection.

This city makes for the perfect place to simply get lost in.

Fes (or Fez) is one of Morocco’s four imperial cities and is the former capital of Morocco. Fes is one of the most historic and oldest settlements in North Africa and is home to the oldest university on the planet, established in AD 859.

Fes is also home to one of the largest mosques outside of Medina and Mecca. This Moroccan city is rich in cultures, with significant populations of people from Spain and Tunisia.

Prepare to step back in time when you visit the Old City of El Bali, a golden-hued and mysterious labyrinth of palaces, medieval markets, and mosques. The trades and crafts in the streets of El Bali have barely changed in the past thousand years, making it one of the best parts of Morocco.

The stunning deserts of Ouarzazate (or Ourazazate) have been used for many Hollywood films since the 1960s. The city’s authentic Arabian beauty will draw you to it. Admire the beauty of the Sahara desert by taking a desert tour.

You can even take a tour with Atlas Film Studios to see the places where the Kingdom of Heaven and Cleopatra were shot. You can also visit the Ait Ben Haddou settlement. Its city walls you might recognize from backdrops of Game of Thrones, The Living Daylights, and Lawrence of Arabia.

Ourazazate’s main square has brilliant places to shop at and restaurants to fine dine at, which is perfect for some downtime.

The city’s main historical attraction is found on the eastern edge of Ouarzazate, the Taourirt Kasbah, occupied by the El Glaoui dynasty that controlled the town in the early 19th and 20th centuries.

Discover palace kitchens, maze-like passageways, dizzying ramparts, steep steps, and harem quarters which can all be explored on foot. There are magnificent views of the Atlas Mountains and citadel on the battlements.

There are many other cities and even towns that you can visit in Morocco, such as Ifrane, Beni Mellal, Larache, Kenitra, Taroudant, Settat, etc. Whether you’re spending five days in Morocco or only one, there are plenty of cities to visit. From the desert to the coast, the Atlas Mountains and the Todra Gorge, Morocco has many sights and activities to offer, in addition to its rich history. So get ready to explore and add these Moroccan cities to your travel list when you go on holiday to Morocco.

Connect with us on social media and let us know if you have a favourite or best city to visit in Morocco.

Check out these related articles:

Three Reasons to Visit Portugal in the Winter

The Best Beaches in Cape Verde

Grand Bazaar and Spice Market of Istanbul Turkey in Photos